“Build a good name. Keep your name clean. Don’t make compromises, don’t worry about making a bunch of money or being successful – be concerned with doing good work and make the right choices and protect your work. And if you build a good name, eventually, that name will be its own currency.” – William S. Burroughs

“What you do is what matters, not what you think of say or plan.” – Jason Fried 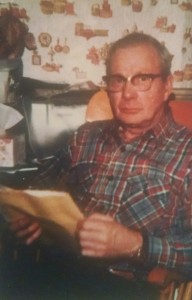 Earlier this month marked my maternal grandfather’s birthday. George Warren McMurray was born on April 4, 1916. In the grand scheme of things, he did not live a long time but the impact of his life is still being felt today nearly 30 years since he passed.

I was barely five when my grandfather passed and I can only recall one memory…and, to be honest, it may be one that has been made up in my head from the time that I was little. Even though I was very young and lack in memories, his life has impacted my life in several ways. For one, I honestly believe that his struggle with Alzheimer’s has led me to the path that I am currently trodding. I could not say if he is the reason that I am still working with Alzheimer’s and dementia patients but he is one of the reasons that I jumped at the opportunity to start. The lack of knowledge that was communicated to my family during my grandfather’s decline was horrific. They lost him because he did not remember him and they did not understand what was happening.  As I have striven to come to an understanding of my grandfather and to get to know him these many years later, I have learned how much I will never know. I suppose that is how I view this man – an enigma. I hear stories that paint him one way, only to hear stories that contradict that vision. He was tough but gentle, hard-working but playful.

One common theme that I have found is that work always came before anything else. Not just work, though, hard and good work. He did not leave a job undone and his word was his bond. My uncle stated, “Dad worked real hard and expected things to be done best possible.” My mom wrote, “My father was a very hard worker and instilled that into his children. The work must be done completely and properly with no short-cuts.” I see this characteristic in each of his children. The phrase, “work will win when wishy-washy wishing won’t” comes to my mind when I think of this family. 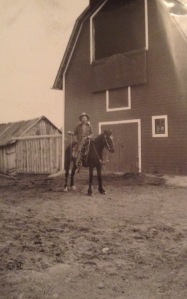 In addition to being a hard-worker for the welfare of his family, he looked to help others. It was his thought that if you were feeling down on yourself, you needed to do something for someone else. I have an uncle that recalled my grandfather helping neighbors put up hay in the summer and helping to feed the neighbors cattle in the winter. When you have provided for yourself, you need to look outward to help others. I think this is a pretty good philosophy.

My grandfather became the “man of the house” very early in his life. His father was killed in an accident involving a bull on the farm. My grandfather had to step up and take care of things and he did.  He made 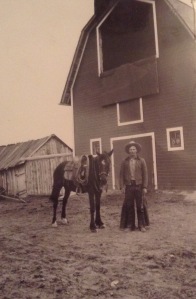 sure his mother, who continued to live in the house after my grandparents married, had money when she needed and was cared for. My mom recalled, “I never heard him complain because of this extra load. In fact, I don’t ever remember him complaining about anything.” He eventually went on to join the forest service, in addition to running the farm. I heard nothing but good things about his work ethic as I was growing up. As a teen, I would roll my eyes because I was just sure that telling me that my grandfather was a hard worker was just a ploy to get me to do more chores. As it turns out, my need to do a good job may stem from this man. It comes from a lot of different areas but I think that his  posthumous example surely played a part.

Family was important to my grandfather. He loved my grandmother very much. He would not stand for his children talking back to either of them, but particularly her. He never forgot a birthday or anniversary. I had the opportunity to read a journal my grandma kept during the last couple years of my grandfather’s life. He was in a nursing home at the time and the love between them is so evident. She made sure that she saw him when possible, even though it must have been so painful to have him not know her after so many years together. They loved each other and stuck with each other in good 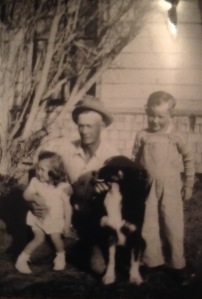 and bad. My grandparents had ten children. 10! Can you imagine? He loved his children and seemed to enjoy spending time with them after the work was done. He would play softball with his kids and, when he tired, he would hit the ball so hard it would end up in the corrals. The kids would chase it and he would go inside! Now, his posterity numbers….I don’t know but it’s quite a number! It has been said that he really loved his grandchildren. My sister remembers him letting her “open his big black case that he carried the papers [for church] in.” He liked to tease his grandchildren. The one memory that I have of my grandfather (remember I don’t really know if it’s real) was me wanting to sit beside him when we were getting ready to eat a meal.  His grandchildren loved him and he loved them. Family.

My grandfather believed in God and taught his children to believe in God. He became active in the LDS church when my mom was a teenager. An aunt of mine (his daughter-in-law) wrote, “I know he had a testimony of the Gospel, he just kept it to himself. His way of showing it was by his service.” He served as the Ward Clerk in Liberty, Idaho for many years and under several Bishops. My mom stated, “I have been told how exact his work was and how the reports were always on time. Once a former Stake President even told me that.” This goes back to him believing that a job always should be well done. My grandfather was respectful of home teachers that would come visit and his children were expected to behave during these visits! Even before he became active in the church, he insisted on holding family prayer and taught his children stories from the Bible. My grandfather may have struggled in some areas regarding his spirituality but he believed in God and let that belief dictate (most of) his actions. That in itself speaks more to me than a million sermons ever could.

So, no I do not really remember my grandfather. The person he was began the long goodbye before I was born. He was lost to those that loved him long before he died. However, I see him in the way his children serve others, the way they work hard and expect others to do the same, the way his family loves each other. Over this past month, as I have contemplated his life and taken a look at his posterity, the one thing that I have noticed is that this family loves and supports each other. That is my grandfather’s legacy: his descendants going forth to live full, productive, love-filled lives. I’m sure that at least makes him smile.

One thought on “George Warren McMurray…Search for My Grandfather”

The Fun Stuff to Read!

#flowerhell
These last few weeks have been soooo long for a variety of reasons. This is the thought that has kept returning to me over this past week. We determine our reactions. Stop letting others ruin your days/weeks/etc. I can do that just fine on my own. 😂
It moves faster than when I was a kid but it still captivates my attention.
🤷‍♀️
It’s almost as if “someone” is ready for summer and warm weather.
❤️🙏🏻❤️